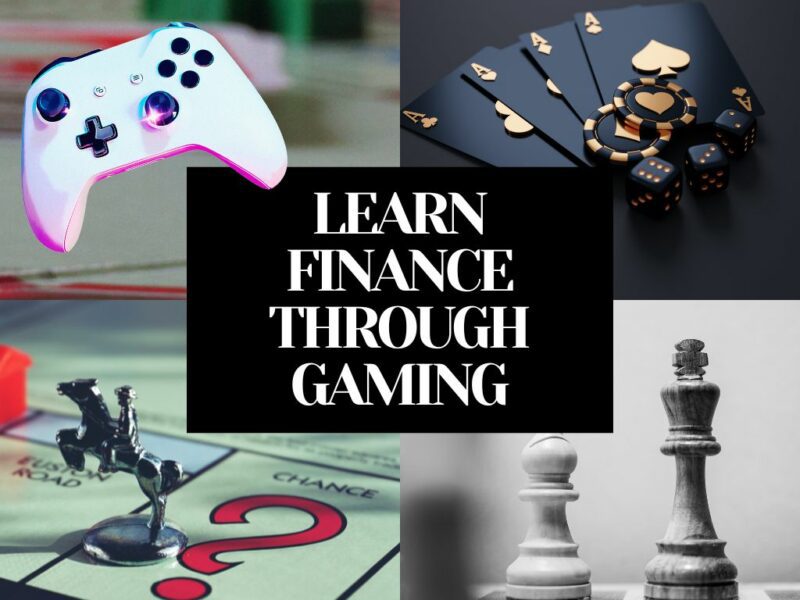 Ever wondered if we can learn finance through gaming? What can a game teach us about finance? We seldom see overt recommendations that people take to gaming in order to learn the principles of finance. At the same time, however, specific insinuations to this end do come up. For instance, some who like to play lifestyle and management board games will swear that the lessons those games teach translate to real life.

Numerous successful businesspeople and investing gurus have spoken about how much they’ve benefited from games like poker and chess. And just this past summer, Forbes.com looked at video games for their “ability to educate users” on managing finance.

Despite the fact that no one ever says, “Go play games if you want to learn about finance,” it’s clear that the idea is out there in relation to a number of games. But is there anything to the idea that these games can instill useful lessons? Have they helped others manage their finances? Here we’ll explore these questions as they related to different kinds of games.

Let’s take a look at what we can learn about finance through games such as chess, poker, monopoly, and video games.

The notion that video games teach financial strategy in any sort of broad or consistent manner is easy to dismiss. At the same time, however, the aforementioned piece from Forbes identifies some specific cases in which basic financial principles are practiced in games. It pointed to games like The Sims and Animal Crossing, for instance, as being educational regarding personal financial management (with each game requiring that players invest early sums effectively).

It then highlighted sports titles like FIFA and NBA 2K, which challenge players to manage budgets and allocate funds on behalf of teams. The article even touched on war strategy titles like Age Of Empires and Civilization, noting that they require players to build complex economies, balance needs, respond to disasters, and the like.

Altogether, these examples comprise a reasonable argument that some financial strategies can in fact be learned in video games.

Poker’s connection to finance goes two ways. On the one hand, we’ve seen some successful (and wealthy) poker players such as Phil Ivey and Andy Beal become savvy investors. On the other, there are also major figures in business and finance (like David Sacks and Chamath Palihapitiya). But is there actually anything that these figures are learning from poker and applying to finance?

That can’t be answered with certainty, but some aspects of poker can help reinforce proper financial habits. Poker.org’s look at how to win in the game sheds some light on a few of these, such as the need to manage a bankroll (keeping tabs on wins, losses, and what you can afford to bet) and the importance of leaving ego out of strategic decisions. These are skills and habits that can be learned through poker, and which can absolutely be of use in the financial world.

Chess is somewhat like poker, in that it’s closely associated with various successful people in business and finance. Warren Buffett, Richard Branson, and Elon Musk, for example, are all known to be regular, skilled players.

If there’s any genuine link between chess and these people’s staggering success, it is likely somewhat intangible or difficult to define. Chess is known to improve memory, focus, and potentially even memory, and anyone who plays regularly can see these benefits pay off in their lives and careers.

Regarding finance specifically, though, one way in which chess may be beneficial is that it instills an understanding of the process and thinking ahead. This was brought up in an Insider piece on chess and wealth, which in turn referenced a book called “Rich as a King.” This book posits that people should design financial goals like grandmasters plotting out chess games, such that a strategy becomes apparent and a plan can be developed to carry it out. We can’t necessarily point to anyone who’s used this approach consciously, but the concept is sound.

Where board gaming is concerned, it’s best to zero in on Monopoly –– a classic, beloved game that overtly revolves around financial management. In this case, the connection is quite clear. Monopoly teaches players how and when to spend; it demonstrates the value of investment and diversification, and it instills an appreciation for patience when it comes to accumulating wealth.

Now, we can’t point to a specific example of a Warren Buffett-like figure chalking success up to Monopoly. To the question of whether or not gaming can teach finance though, it’s hard to argue against the potential of Monopoly to provide useful lessons.

There are plenty of concepts of finance to learn through games, such as managing resources effectively, preparing for emergencies, understanding the relationship between risk and return, the importance of investing in assets early, etc.

While select games offer the opportunity to learn finance through gaming, it doesn’t mean we’d necessarily advise people who want to learn more about financial management to take up gaming. For true education in this field, it’s still best to attend a school program, or read through the “Personal Finance Books” we’ve highlighted in the past. If you happen to have a gaming habit though, it’s wise to be aware of how it might be helping you in other areas, including understanding your finances with clarity.

Fresh from the Blog